The invisible life of a wireless network has been captured in a series of photographs by a Newcastle University student.

The images, created by researcher Luis Hernan, show the spectres of wireless networks “sweeping, swirling and swooping” around a ghostly figure.

Mr Hernan said the aim of the photographs is to bring the invisible world around us to life.

He said he calls the images spectres because they “remind him of ghosts”.

The architecture and interaction design PhD student became fascinated with the idea of being able to see the hidden wireless networks which surround us. 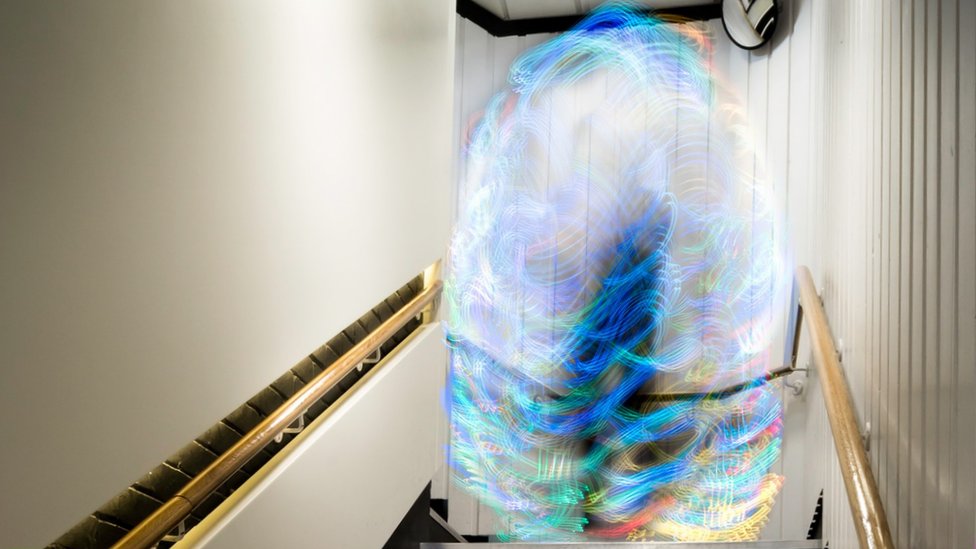 He said: “I call the images spectres because wireless networks remind me of ghosts. They are there but you can’t see them with the human eye.

“The fact we are becoming increasingly reliant on something that we can’t see intrigues me. I wanted to find a way to show the wireless which is around us and also to show how it changes.”

Mr Hernan created the photographs by a Kirlian Device, an instrument specially designed by him to reveal the qualities of wireless networks.

The device monitors the signal strength of your wi-fi network and translates it into colour LEDs – red represents a stronger signal and blue means weaker. 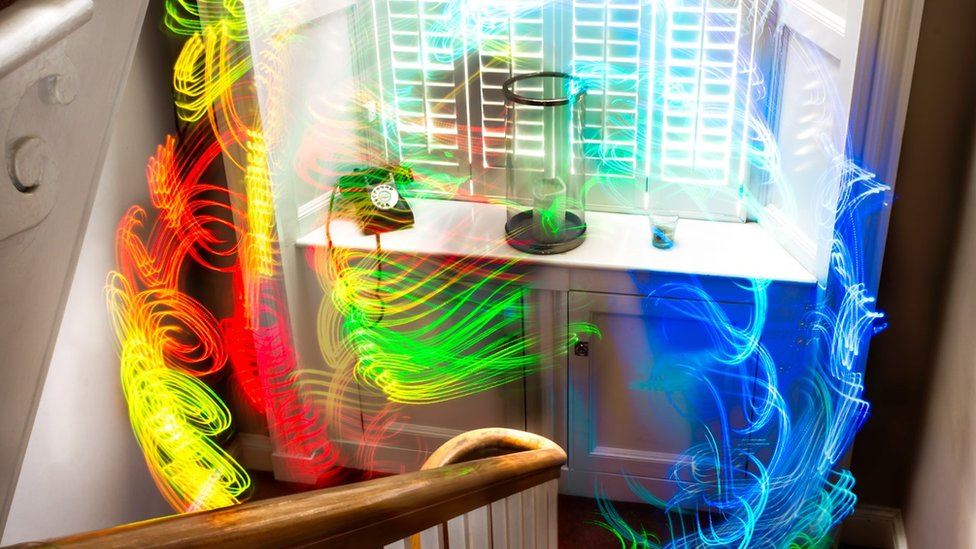 He then used the device in different places and his movements were captured using long exposure photography.

The results are multi-coloured streaks of light which twirl and wrap in spaces, showing how we are surrounded by these networks without even realising we are.

He said: “It is an impossibly fragile and volatile infrastructure that holds our digital technologies together and shapes the way in which we interact with the digital world.

“Something as seemingly inconsequential as walking around the house will interfere with and reshape their strength field. Close the wrong door, and the bedroom becomes a dead spot for wireless.”

Yet another illegally erected Cape Town mast has been ruled against - this time by the Supreme of Appeal who significantly ruled in a landmark case that the placement of masts must be done in accordance with the City’s Municipal Planning by-law, giving local auorities more say than national government in this regard. Hopefully this will set precedence for other illegal installations too.

This particular mast, erected in 2016 by Telkom in Heathfield, has had a long-standing legal battle (at tax payers expense and at huge personal cost!)

After much pressure was applied on the CoCT to have the illegal installation removed, the COCT ordered Telkom to dismantle it. Telkom then took the matter to the High Court saying that local government had no jurisdiction over them as they are owned by national government. The city won. Telkom appealed, and the city won again. At this stage the City’s legal department undertook to have the tower disconnected as Telkom’s next move was the Supreme Court.

This week the Supreme Court of Appeal dismissed Telkom’s appeal against a Western Cape High Court judgment that it is obliged when erecting a cellphone mast – whether free-standing or rooftop-based – to do so in accordance with the City’s Municipal Planning by-law.

Huge credit to the Heathfield residents who created such a strong voice opposition, aided in the early years by the late Muna Lakhani. And to Olga Sheean who featured this mast installation in her letter to Cape Town officials entitled "Challenging the towers that be". And most especially to Dee Rowland for her relentless efforts - for staying the course in her ongoing deadlings with Council and for refusing to back down. Well done all!

Hopefully this ruling will set precedent for more illegal masts to fall in SA and for more efforts to be applied by industry to rather invest in safer and more sustainable solutions like fibre without the 5G / "smart" living extension!

Search on the word "Heathfield" to find more on our website www.emrsa.co.za ... See MoreSee Less

Joel Moskowitz from the School of Public Health at the University of California has compiled an updated list of newly-published scientific papers on wireless radiation and electromagnetic fields (EMF). Thank you Joel! ... See MoreSee Less

A compilation of more than 750 abstracts of studies on wireless radiation and electromagnetic fields published since August, 2016. Updated once or twice a month.

According to Stats SA's "Victims of Crime Survey" for the 2018 period, cellphones are the most likely thing to be stolen off your person, with nearly half a million incidents reported last year. And they're also one of the most likely items to be stolen during a housebreaking (accounting for nearly a quarter of total goods stolen.) So stay vigilant, contribute to building stronger community and don't be over-reliant on that tech for your safety!

Here are the things criminals are trying to steal from you

Stats South Africa has published its latest Victims of Crime Survey, showing which crimes are most prominent in South Africa, and how individuals have been affected by them.

With Telkom's announcement that it plans to shut down its copper network and no longer support that infrastructure, what are the alternative options for homes and businesses dependent on landlines and ADSL?

According to MyBroadband, "Moving from ADSL to fibre is a no-brainer in areas where the technology is available, as fibre is both cheaper and faster than copper-based broadband."

According to Web Africa, fibre optic solutions are now cheaper than ADSL so it definitely makes sense to migrate landlines and computers to run off that network.

But what about those areas which don't yet have fibre, typically the less affluent or outlying areas, including all townships? " It is in areas where Telkom ADSL customers do not have fibre coverage that the company will encounter difficulties moving customers away from copper."

Those without the option to migrate to fibre will be encouraged to adopt LTE (4G wireless communication), increasing the risk of health and environmental harm in these areas. This should be opposed.

After years of waiting for affordable fibre to be rolled out to townships in SA, Telkom recently rolled out fibre to Soweto. "According to Telkom Group Chief Executive, Mr. Sipho Maseko, Telkom has invested in fibre to the home in SOWETO because Telkom believes that access to broadband has become a necessity for human and economic development. Addressing students of Orlando West High School, Maseko said the availability of the fibre will help Sowetans bridge the digital divide by bringing the world to people’s doorstep."

We agree completely but believe that this is not nearly enough - all available funds should be directed to offering fibre nationwide before throwing money at 5G which is a less sustainable long term solution for this country. And it would ultimately make more financial sense getting the right solution in place from the outset!

What to expect when Telkom turns off your ADSL

Telkom recently outlined its plans to shut down its copper network, as first announced by its CEO, Sipho Maseko, in May 2019.

On Day 4 of the 5G Summit, Kevin Mottus (CA Senate candidate and outreach director for the CA Brain Tumour Association) explains the captured regulatory system in the US, starting with the FCC (the Federal Communications Commission). A Harvard Ethics report entitled "Captured Agency: How The FCC Is Dominated By The Industries It Presumably Regulates" details the ways in which the telecom industry uses the same playbook as tobacco when it comes to lobbying and strategies to influence public perception.

When pressed for answers, the FCC say that they take advisement from the FDA, but in reality it is the FCC that has primary responsibility for these exposure. And according to the FCC's website "there is no federally mandated radiofrequency exposure standard". So it's important to understand that the FDA's role is purely an advisory one which is also heavily influenced by the wireless industry.
[Aside: In South Africa we have a similar situation where our Department of Environmental Affairs say they take direction from the Department of Health who have said in Parliament that they have no funding or skills for research here and defer to the Directorate for Radiation Control (DRC). The DRC's Leon du Toit - who has reported to industry/ICNIRP's WHO EMF Project for over 15 years - has repeatedly warned South African councils that “local and other authorities... should not attempt, from a public health point of view, to set any restrictions with respect to parameters such as height of the mast, distance to the mast & duration of exposure.” This is yet another clear example of the fox tending the hen house...]
To learn more about why your government isn't protecting you and what you can do to protect yourself better, there are still 6 hours to catch Kevin's talk or that of the 5 other speakers from Day 4

Or you could purchase the full 5G Summit package with all the interviews on a flash drive. Better to inform yourself offline if you don't yet have cabled computer access...